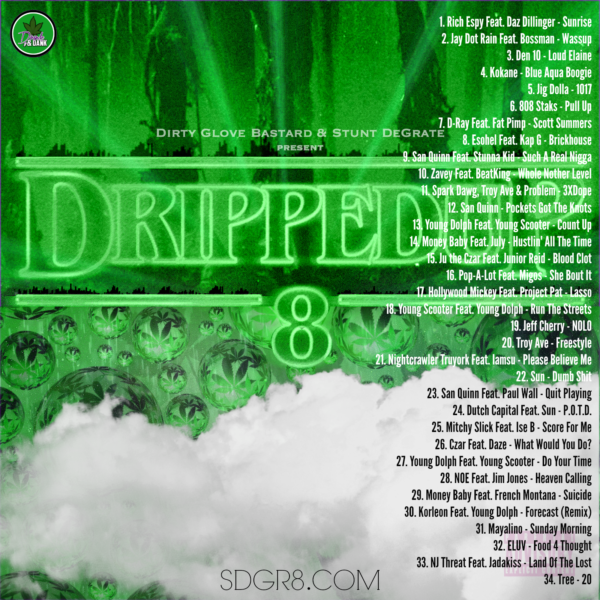 It’s been a good run. When I started Drank and Dank, and then the Dripped Up series my intentions were good. As a long time fan of the culture, I felt like the websites (with a few exceptions like DGB) weren’t covering hip-hop correctly. A majority of reviews , even on the biggest sites, seem as if either the reviewer had an agenda or didn’t actually listen to the project. It seemed like if you watched 10 interviews from the same artist they’d have 80% of the same questions. To put it frankly, a majority of bloggers were lames, goofies, culture vultures, or simply plain old-fashioned opportunists.

Despite never owning a computer, in 2010 I decided to try my hand at blogging. Not necessarily because I could do it better, because I could do it more authentically. My willingness to travel to places that bloggers rarely ventured, quickly gained me access and helped me secure many exclusives, from music to interviews. I began the Dripped Up compilation series mostly with artists I knew or worked with. The goal was to simply get them more exposure. Mission accomplished, many Dripped Up alumnus have gone on to major things. Many of them earn a good living in or around the music industry. That’s a beautiful thing.

What’s not a beautiful thing is opiate addiction. Prescriptions for opioid painkillers have risen by 300 percent over the past 10 years, and Americans use 80 percent of the world’s opioids. Whether it’s pills or lean, Big Pharma has hooked America on legal heroin. Gucci Mane isn’t using the word junkie to describe his drank use on accident. As I’ve gotten older I’ve witnessed far too many of my friends and comrades succumb to opiate addiction. Overdoses, death, poverty, & the cycle of incarceration have become an all too familiar site in our culture. Since I’ve began to dabble in social activism, I feel that it’d be hypocritical to continue with Drank and Dank any longer. Dripped Up 8 will serve as the outro for Drank and Dank, and trust it’s a good one. The projects exclusives include Young Dolph, Young Scooter, Korleon, San Quinn, Mitch Slick, Den 10, Zaytoven, Jig Dolla, Mayalino, 808 Staks, Jeff Chery, Jay Dot Rain, Kap G, Iamsu, & many more.