In the era of instant gratification, there are not many who are willing to undergo what it truly takes to prove their genius is authentic. But one producer has been tirelessly working and is now emerging; bringing a region traditionally recognized for an outdated style a breath of fresh air. Meet June James. June The Jenius, as he is better known by, is a producer from Houston, TX that has dedicated his life and career to showing the world his particular sound of ‘Jenius’.

In November of 2016 James had what would later become his first record enter the Billboard Top 200 chart. For almost ten years he has been a relatively mysterious producer behind countless regional hits, but it was only until recently that his relentless work ethic led to him breaking into the national spotlight with artist YFN Lucci. James’ production brought the up and coming Atlanta artist to the forefront of rap seemingly overnight, with his platinum selling record Key to the Streets featuring Migos & Trouble making its way to the number one spot on USA Today’s urban radio chart, gaining over 52 million YouTube views, and earning a remix featuring 2 Chainz, Lil Wayne, and Quavo.

I recently had the chance to sit down a talk to James. On the rooftop of an empty bar across from the BBVA Compass Stadium, James spoke of his early years in music. In between the explosion of fireworks across the street from the Houston Dynamo’s victory, I was given the full picture of the work and dedication it took for him to achieve where he is today. Growing up during what many would call the ‘golden era’ of the Houston rap scene, James was inspired at a young age by the music of Pimp C, Scarface, and Slim Thug to begin making beats. The 27 year old comes from what he described as a family full of ‘overachievers’. His mother works in a high-ranking corporate marketing position at a large computer software company and his uncle is a dean at an Ivy League university. As he continued to tell me about his home life, it became apparent that the pressure on him to succeed began at an early age.

James’ father passed away when he was only a toddler and he discovered that anything he wanted would have to be worked for. His interest in music developed early on when he taught himself how to play multiple brass instruments. Inspired by the 2002 film Drumline, James took the initiative to study music theory; something that he claimed was a major advantage when he began producing later on.

Many young adults struggle with the pressure from their family when it comes to making major decisions about going to college and choosing their career path, but James knew during high school that being a producer was his destiny. He recalled that his uncle told him going to school for audio engineering wouldn’t make him very much money, but adamantly James told his family that his goals were beyond learning how to operate a mixing board.

His dedication to learning multiple instruments and knowledge of music theory lead to a full ride scholarship offer from Texas Southern University. A full ride is a dream come true for all college students, but there was a problem that James faced: He had dropped out of high school during his senior year, right before his graduation. “I got a full ride scholarship to TSU for band, but I had to forge my transcripts to get in. I just forged the final high school transcripts and I got accepted,” he told me. “That used to be the hustle. I used to sell fake report cards, progress reports, hall passes and all that… it was all between that and selling beats.” From a young age James wouldn’t let anything get in his way. 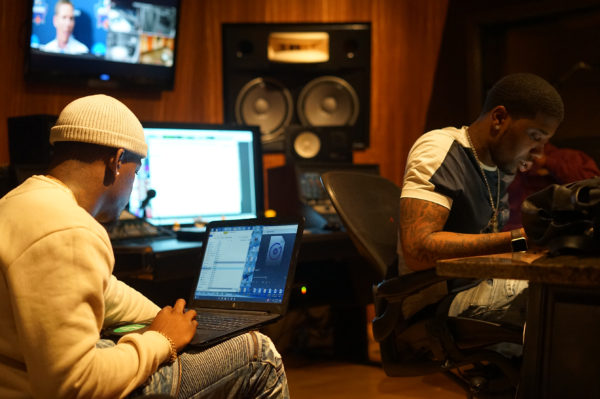 Between sips of a Hennessey and Red Bull, James recalled with slight nostalgia his transition between going to college to the moment he decided it was time to take music as serious as he could. Laughingly he said, “I played in the Ocean of Soul (TSU Marching Band) and went to the Honda Battle of The Bands and won.” Soon he realized that the academic route was not for him. “After my freshman year I dropped out, that was when I was makin’ beats real heavy and band didn’t pay the bills, so I just dropped out. College was really a blur, it was partying and marching band…I’m not gonna lie.”

After James decided that college was not the right path for him, he said that music took him straight to the streets. As an early member of LAD DJs, a regionally recognized college party promotion group, he took his position as their in-house producer seriously. By the time he was legally able to drink, he had achieved a major milestone in every producer’s career: producing a record that makes it on the radio. Swagged Up I Be Killin by Rai P and MC Beezy, as well as other buzzing local records produced by James were solid stepping-stones for the Jenius in his early 20’s. Not long after, he was producing for some of the hottest artists in Texas, such as Yung Nation and Fat Pimp, during the Texas boogie movement.

After his stint in LAD DJs, James parted ways with the promotion collective and switched his focus to the two collectives that he is currently a part of: DSD1 and The Hit Cartel. “We took it from Third Ward to Acres Homes…it was time to do something of my own,” he said. “Lil Ju and I had originally started The Hit Cartel, and now we have multiple producers and artists and they’re all going hard and doing their thing.” His continuous hustle in music led to his first major placement in 2012 with Plies. With production credits that include most of the major Houston artists, as well as many up-and-coming artists from Atlanta, James is now finding that his beats are becoming desired by some of the biggest names in music. 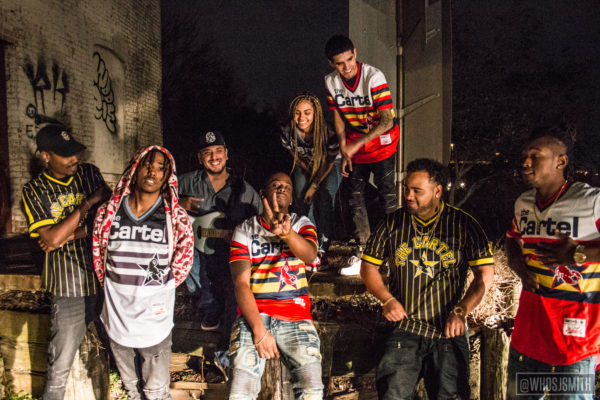 The Hit Cartel. Photo by JSmithShotIt

His recent work with YFN Lucci led to multiple offers from major record labels. He ultimately decided to sign to Think It’s A Game Records out of Atlanta. “I had offers from Warner and a few other major labels, but TIG was able to match everything the other labels offered, and the opportunity to sign with them as their first producer just felt right…It’s like family with them.”

Now that major industry artists such as 2 Chainz and Justin Bieber are knocking at his door, having the tight knit support from TIG, DSD1 and The Hit Cartel is very important to him. James made it clear that he is done wasting energy trying to help artists break out of Houston. “I’m burnt out from doing favors for people that ultimately didn’t appreciate what I did for them,” James explained. “I’ve dropped bands on people’s music just to help them get to the next level, but they didn’t want it as bad as they claimed.”

No one is able to deny the consistent work that he has put into bringing his ‘Jenius’ sound to the fore front of not only Houston but the Atlanta music scene as well. Now that the radio-charting records are consistently coming out, James is focusing on the future. Between The Hit Cartel, his personal mixtape series You’re a Jenius, and the development of his own artists LaRay and Magic, his hands are full – but that does not deter him from focusing on making daily progress. James’ artist Magic’s upcoming project will be hosted by Hoodrich Keem, and is slated for release this summer.

Thomas Edison once said, “Genius is one percent inspiration, ninety nine percent perspiration,” and June the Jenius has no intention of letting his hard work stop any time soon.